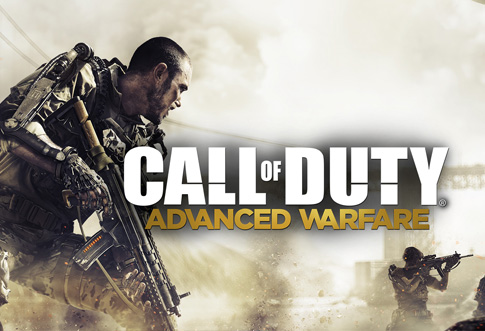 Apparently seen weaknesses such as part of the Call of Duty experience that the shift to new consoles hasn't seen them addressed, or at least made less glaringly obvious.

Advance warfare envisions the powerful battleground of the future, where technology and tactics have evolved to usher in the new era of combat.

Call of Duty: Advance Warfare developed by Sledge Hammer Games (co-developer of Call of Duty Modern Warfare 3). Harness the first three-year, all next-gen development cycle in franchise history. The player will take control of the futuristic vehicles and weapons in the new era of first-person shooting. Become empowered with powerful exo-suit that will enhance your ability giving you unparallel endurance, awareness, speed and strength. A new era of combat that brings the future of powerful battleground were tactics and technology have evolved. 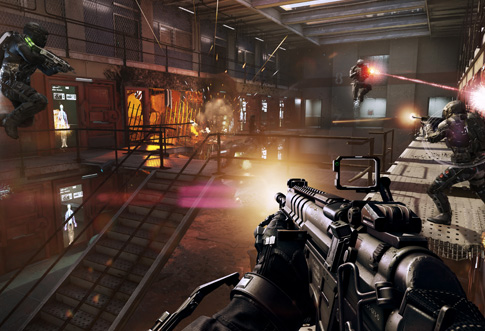 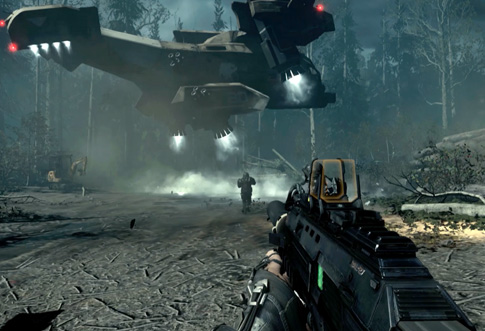 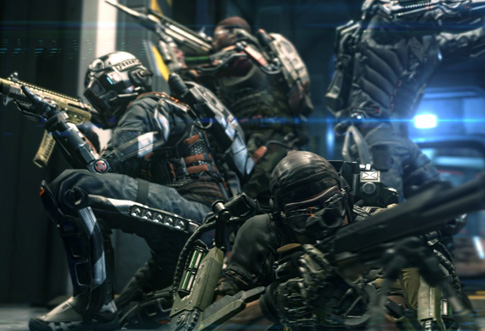 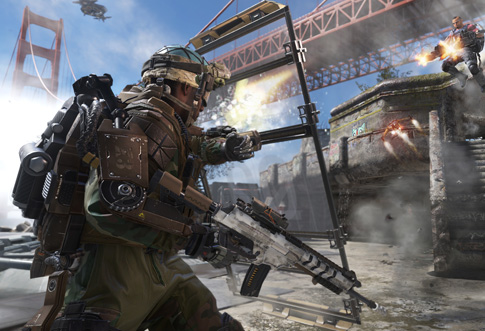 An advance world which is carefully research and vision the future of Private Military Corporation to dominant armed forces for rewriting the rules of war, redrawing borders and outsourcing their countless nations of military needs. An advance soldiers equip with exoskeleton that enhance their ability to deploy advance lethality and eliminating needs of specialization. And advanced arsenal that brings player to future battleground by arming players with all-new equipments, perks, and vehicles like hovers and highly specialized drones. Players play as Jack Mitchell, a Private Military Corporation (PMC) that is with Badger Squad. He is gruff and reserved after personal loss. Help him to get through the perils of Advanced Warfare.  This is a Call of Duty game, so expect very tired and stereotypical missions .However the game equip with unique gadgets that help you to finish the game. There are 15 missions in Advance Warfare’s single player story, get 3 pieces of intel for each mission.

Most of the fans of the Call of Duty: Advanced Warfare multiplayer game series always wait what is new in multiplayer options. Some new players didn’t know about the tricks of the game multiplayer trades. But even there is a new moves in Exo-suit, like shielding, dashing, double jumping and invisibility cloak. There is always usual disadvantage. In this game there is a cooperative mode called Exo Survival that comes with the exciting fun where never known fun part is coming next. A moment that you will fight the attack dog and collect intel then fight with giant robots and invisible enemies. A nice mixture of offensive and defensive objective, and working with three players and picked a complementary Exo’s as the battle become difficult. It doesn’t ramp up as it should. You can also used your unlock points to upgrade weapons and suits that’s help you in the mission.

Throwing a suit of robot onto the game could have been a lazy path of the game seems different from the previous game that we played. But the developer has integrate its enhanced ability we choose in aspect of how we fight in the game. The game granted weight and importance to change the first-person shooting action feels in three different game modes.

Multiplayer Call of Duty: Advanced Warfare sees this multiplayer return, but the Exo Suit changes things quite dramatically, even if the core Call of Duty feeling is still intact. It supports up to two players in split-screen, and it allows two players to take the game in split-screen online mode as well. You also have the option of playing the game offline with bots, if you wish to do so.

Classes: You are automatically placed into one of two types (Atlas or Sentinel) In addition to custom classes, there are five classes that are pre-made in the game that you can choose from;

Exo Survival-In Call of Duty: Advanced Warfare, the co-op functionality is called Exo Survival. It is similar to the Spec Ops Survival mode from Modern Warfare 3 in design.In Exo Survival, there are 25 rounds. In between rounds, you have a little over 40 seconds to attend to your needs, such as purchasing new weapons, upgrading your exo suit, stuff like that.After completing the 25th round, the map “flips”. The waves start back from thebeginning, except the enemies are slightly tougher.

Achievements: there are 51 achievement that you need to finish in this game in any difficulty.These are the achievements that tied in each mission or level in the game.

You can visit the official website of Call of Duty: Advanced Warfare game to understand the game more.